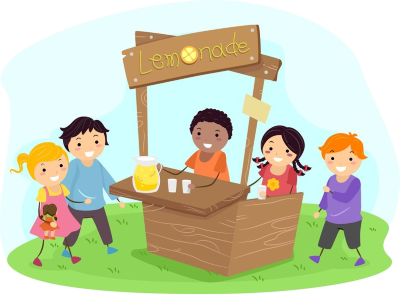 "Ma'am, would you like an ice-cold glass of lemonade? It's pretty hot out here." Dave called out from his stand, which stood by the roadside.

A passerby woman, in her mid-fifties, wiped beads of sweat from her forehead. She was glad she put on a light piece of clothing. There was no escaping the sun in summer.

The woman clutched her bag as she turned to see the kids' lemonade stand. It was decorated with bright colors and balloons. The words "THE PERFECT LEMONADE FOR YOU" were boldly written on the banner in a very artistic way. Very impressive, she thought.

"I'll take one," she called out and moved closer to the stand. The children were joyful and polite. The lemonade tasted great. A cold glass of lemonade was exactly what she needed to calm her nerves. "You kids are life savers," the woman said through a smile. She then turned and strolled away.

"Dave, could you go get more lemons?" Claire asked. "We have sold so many. There's not much left."

"Why doesn't Erica do it?" he replied. "She hasn't helped with anything yet." Dave turned to Erica who remained seated and scowled.

Dave, Claire and Erica were close friends. They had earlier planned to set up a stand and sell lemonade. But when it was time for work, Erica chose to sit on a chair and watch her two friends do everything.

"Okay, Erica. Could you help us get more lemons from the house?" Claire asked her.

"That's a lie." Dave shouted angrily. "You don't want to help us." He knew Erica and how she often acted self-centered.

"Leave her alone," Claire told Dave. "I'll just run home and get the other basket of lemons myself. It's no use arguing."

Dave ground his teeth as Clare ran off.

A cool breeze swayed the trees, which happily danced to its tune. Birds flew from tree to tree as they chirped. The children were at Dave's house. The clanking of pots and sweet aroma came from the kitchen. Dave's mother was preparing dinner.

In the living room, the three children sat on a couch. "I can't wait to go to the water park tomorrow," Dave announced.

"All three of us, right?" Erica exclaimed happily.

"Uh. No, it's just Dave and I," said Claire. "We only purchased two tickets." Erica's expression changed to that of disappointment.

"Hey! I thought we were friends," Erica whined. "Why did you buy tickets without me?"

Claire set a hand on Erica's shoulder. "We purchased two tickets to the water park using the money we made from the lemonade stand. Remember, you did nothing to help."

"I was there the whole time." Erica sobbed, her cheeks flushed with anger.

"Whatever!" Dave accused. "You just sat there and watched us do all the work. You never helped with anything."

"Listen, maybe you could rake leaves or trim some bushes," Claire suggested. "Our neighbor, Mr. Peters, needs someone to help him out in his garden. That way you'll be able to earn something."

"And I'm glad you now realize your mistake," Claire admitted.

The three friends hugged one another, each wearing their own smile.