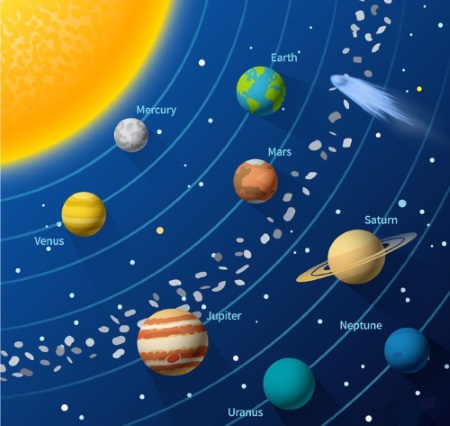 Our solar system is made up of the sun and all the objects that revolve around it. This includes eight planets, their moons, icy comets and mysterious asteroids.

The closest planet to the sun is Mercury. Mercury is also the smallest of the eight planets. It is covered in craters, which cause the planet to look a lot like our own moon. Mercury completes one revolution around the sun every 88 days.

Even though Venus, the second planet, is further away from the sun than Mercury, it is the hottest planet. Dense clouds and a thick layer of carbon dioxide prevent most heat from escaping into space. At its surface, Venus gets hotter than the inside of your kitchen's oven!

Earth is the third planet from the sun. Its surface is mostly covered by water. Earth is similar in size to Venus. Many scientists believe that Earth formed nearly four and a half billion years ago.

Mars is the fourth planet from the sun. Its reddish color is due to the large amount of iron oxide on its surface. Mars is home to the largest mountain in the solar system. This mountain is called Olympus Mons, and it reaches up 13 miles into the Martian sky!

The largest planet, Jupiter, is so huge that you could fit all the other planets inside of it. Jupiter is mostly made up of gas and vapor clouds, so it would be impossible to stand on its surface. Jupiter has a large storm that has been raging for over 100 years. The storm is so large that 2 planets the size of Earth could fit into it. Jupiter also has more than 60 moons.

Saturn is the sixth planet from our sun, and best known for its fabulous collection of rings. Saturn's rings are not solid, though. They are made up of chunks of ice and rock. Some chunks are as small as grains of sand, while others are as big as a house.

Uranus has the strangest rotation of all the planets. Spinning on its side, Uranus looks as if it is rolling through space. Uranus is so far from the sun that it takes 84 Earth years to complete one revolution, or trip around the sun.

The planet farthest from the sun is called Neptune. Neptune has a darker blue tint, causing it to appear as though it is covered by water. What you see is not water. Instead, Neptune is covered by dark clouds. These clouds are being blown around Neptune's atmosphere at nearly 600 meters per second.

Between Mars and Jupiter is a large collection of asteroids. Asteroids are large chunks of rock that orbit the sun. Distances between the asteroids are so great that If you could stand on an asteroid and look around, the next one would be too far away to see very well.

The most unpredictable objects in our solar system are comets. Comets are huge chunks of ice and dust that hurl toward the sun at great speeds and then travel back out beyond Neptune. As they approach the sun, they heat up. This heating causes the ice to melt and form a vapor trail away from the sun.

Our solar system is still very much unexplored. Scientists must use telescopes and probes to take pictures and measurements. Maybe someday humans will be able to visit the various parts of the solar system and see its wonders up close.