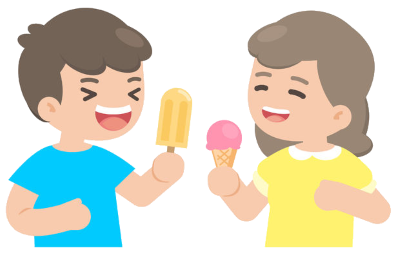 We all enjoy a good snack from time to time. But I bet you didn't know that many of the snacks you enjoy eating were actually created by accident.

Could you imagine a summer without popsicles? We almost didn't have them. Luckily, back in 1905, a young boy named Frank Epperson put a mixing stick in a cup of soda-powder and water and left it on his porch overnight. It was a cold night and the mixture froze. When he pulled on his mixing stick, out popped the first ever popsicle!

Ice cream cones also happened by mistake. During the St. Louis World's Fair in 1904 a man by the name of Arnold Fornachou sold so much of his ice cream that he ran out of cups. A nearby vendor, Ernest Hamwl saw that Arnold needed help. Hamwl rolled up one of his waffle-like pastries that he was selling and gave it to Fornachou for his ice cream. Instantly, a brilliant idea took form!

Even potato chips happened by complete chance. A chef by the name of George Crum had served a customer some French fries that were too thick. To please the upset customer, George sliced and fried up a new batch of thinner potatoes, but they were still too thick for the disgruntled customer. This time, George sliced a batch as thin as he could get them. The customer loved them, and the thin, crunchy potato chip was born.

One of the most popular accidental snacks could very well be the chocolate chip cookie. In 1930 a woman by the name of Ruth Wakefield ran out of baking chocolate while making cookies one day. She decided to break up a bar of chocolate and added the pieces to her batter. When Ruth took the cookies out of the oven, she noticed that the chocolate pieces hadn't melted. Ruth realized that she had created something very delicious. Soon thereafter, her inn, The Toll House Inn, became famous for her chocolate chip cookies.

It is truly amazing what can occur in times when it seems you have failed. Some of the tastiest, most well-known snacks were created without a single thought. It makes you wonder what other foods were created by accident.